In-Your-Face Fitness: A few dents in those cellulite theories

An informal poll seems to show some improvement with diet and exercise, but other, more ambitious claims seem to be only so much cottage cheese. 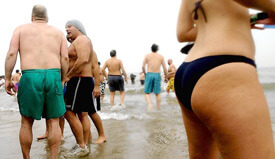 Weight loss may help minimize the appearance of
cellulite – except when it doesn't.
(Stephen Chernin / Getty Images / October 3, 2011)

In July 2010, there was an end-of-days-type hailstorm in Calgary, and my little Acura got hammered. Now I drive a car that looks like it has cellulite.

I'm cheap, and I don't need an overpriced and rapidly depreciating midlife-crisis-mobile to boost my ego; I have biceps for that. But if your biological chassis has bumps and pocks and you want them gone, you can't exactly trade in for a new model.

So is there the physiological equivalent of a "dent clinic" that can make those lower-body bumps go away?

I honestly didn't know. I've seen lots of fit, lean and muscular women working out who have cellulite, and it made me wonder if it is something that diet and exercise can deal with. So I endeavored to find out.

According to the American Society for Aesthetic Plastic Surgery, "Almost all women (and some men) have cellulite, stemming from genetic predisposition, hormonal changes and weight gain." And it's worth noting that an entire Photoshop industry is built around air-brushing cellulite from the images of anorexic actresses who in real life look like they've been cross-bred with cottage cheese.

On an unrelated note, I think every woman reading this column is beautiful and amazing. Please don't kill me.

Here's what I learned.

A paper in the 2010 Journal of the American Academy of Dermatology on the treatment of cellulite asserts that "cellulite can affect individuals regardless of their body mass index" – meaning it's not just a condition for people who are overweight. However, the authors also stated that weight gain "can accentuate the appearance of cellulite."

An article at MayoClinic.com explained that cellulite is caused by clumps of fat cells pushing up against the skin that are interspersed with fibrous cords connected to the muscle underneath. The cords pull the skin down in places and the fat bulges up in between, creating a dimpling effect.

Therefore, it stands to reason that if you lose body fat, the visible effect of cellulite would be lessened. But is that what actually happens? To find out, I decided to conduct an unscientific survey with subscribers to my e-newsletter. The free survey tool I used limited me to 100 responses, which is a nice round number, so I figured good enough. The criteria I set for respondents were: females who had lost at least 10 pounds from a program that included exercise and hadn't used any cosmetic or surgical options to try to get rid of their cellulite.

In terms of exercise, 20% exercised only one to three hours a week, 52% worked out for about three to five hours per week, and 28% got in more than five hours. By far the most popular form of exercise (93%) was aerobic, such as running, cycling, swimming, hiking, aerobic machines and classes, but weightlifting was No. 2, at 64%. Yoga and "other" tied at 24%. Kettle bells and Pilates weren't that popular.

The results on visibility of cellulite were all over the map. Three percent checked the box marked "Gak! It increased!" – which I imagine would be frustrating. And 22% answered "no change." Forty-eight percent said they saw a "minor decrease" and 26% saw a "major decrease."

Only one person said it completely disappeared.

It looked like the "major decrease" change was mostly, but just barely, in women who lost the most weight and exercised the most. Plenty of women who lost 10 to 20 pounds experienced a major decrease as well. What's more, some women who lost more than 50 pounds saw no change in their cellulite. And the woman for whom it "completely disappeared" was in the 10-to-20-pound weight-loss group.

Now to the medical literature.

A 2006 study in the Plastic and Reconstructive Surgery Journal examining 51 women from medically supervised weight-loss programs (plus 11 controls) found that for cellulite, "treatments such as weight loss have variable effects on the improvement or worsening of this condition."

An interesting study of 86 obese women published online in September in the European Journal of Applied Physiology compared the effects of diet and exercise with diet and exercise plus fancy pants that exert pressure on the lower body on visible cellulite. Both groups experienced similar weight loss, but the addition of pressure-exerting pants resulted in subjects seeing a "significant perceived improvement" in skin appearance.

Maybe exercising in ultra-tight pants works better for reducing visibility of cellulite, but I question the practicality. I've got some compression clothing I wear to keep from freezing my butt off while running in sub-zero temps (it's black and makes me look like evil Spider-Man). But in the California sun, such garments would slow-cook you.

So. Both my research and that of real scientists suggest that diet and exercise leading to weight loss can (but not always) reduce the appearance of cellulite, either a little or a lot. This sounds like one of those things where genetics comes into play.

What about other methods?

I saw a YouTube video of former Playboy model Jeana Keough, now some orange housewife from Real County or something, proclaiming alongside her L.A.-based plastic surgeon Dr. Grant Stevens that her use of the "SmoothShapes" laser "manipulates the fat" and "kind of melts it."

Dr. Stevens says, "It's very affordable." That's good, because a paper published in July in Clinics in Plastic Surgery analyzing the use of lasers (including SmoothShapes) and radiofrequency heat, combined with tissue manipulation, for treatment of cellulite asserts that "results with devices alone are usually moderate in benefit and are short lived; therefore, frequent touch-up treatments may be required."

What's more, there is a risk of adverse events such as "bruising, pain, and hyperpigmentation."

Of course, there are all kinds of heavily marketed options, such as creams, injecting carbon dioxide (yes, people do this), acid, herbs and other seemingly magic potions, but the aforementioned Journal of the American Academy of Dermatology paper states that "most treatments lack substantial proof of efficacy."

In other words, those things are probably serpent lubrication.

If your cellulite bothers you and you're carrying some extra pounds, I'd recommend starting with diet and exercise and see where that takes you. But I'm just a guy, and we don't usually get cellulite.

Instead, our hair migrates south.