Does Cryolipolysis Lead to Skin Tightening? A First Report of Cryodermadstringo

Skin laxity occurs over time as collagen and elastin fibers break down. The breakdown is exacerbated by environmental factors, such as ultraviolet radiation, pollution, and stress. The rate of collagen and elastin degradation accelerates with time, while the rate of new collagen and elastin formation slows. For facial and neck laxity, several treatment methods exist, such as surgical lifts, minimally-invasive filler injections, and nonsurgical devices employing radiofrequency, laser, infrared, and ultrasound energy. To treat skin laxity on the body, the same treatment methods are available, although they are not as commonly used.

Cryolipolysis, CoolSculpting System; (Zeltiq Aesthetics, Pleasanton, CA) is a noninvasive method for selective fat reduction on the body. This nonsurgical procedure uses controlled cooling to reduce subcutaneous fat without inducing damage to surrounding tissues. Cleared by the Food and Drug Administration for fat reduction in 2010, CoolSculpting is an established procedure to safely and effectively reduce fat.

A retrospective study on CoolSculpting discussed its clinical safety and efficacy, as well as its potential for business growth, in a plastic surgery practice. As shown in the aforementioned article, significant fat reduction can be achieved nonsurgically by CoolSculpting. Patients in flank and buttocks examples in the article also showed evidence of significant skin tightening. While CoolSculpting is well established as a nonsurgical method for fat reduction, it has not been documented as a skin-tightening procedure until now.

To illustrate the skin-tightening phenomenon often observed in CoolSculpting patients at this practice, 2 patients are presented. In addition to the expected reduction in fat layer thickness, the patients were observed to attain visible skin tightening in the treatment areas. CoolSculpting treatments were delivered to targeted areas for fat reduction per standard treatment cycles for 60 minute duration. A vacuum applicator pulled the targeted tissue into an applicator cup with parallel, temperature-controlled cooling plates.

In addition to the anticipated fat reduction following treatment, skin tightening in the CoolSculpting treatment area was observed. As shown in the female abdomen treatment in Figure 1, CoolSculpting produced significant volume reduction and skin tightening after 4 months. For the female abdomen and flanks patient in Figure 2, the large fat volume loss did not result in skin laxity; instead, 4 months after treatment, the tightened skin adhered well to her new body contours. Pronounced skin folds evident in pretreatment photos were no longer visible posttreatment. 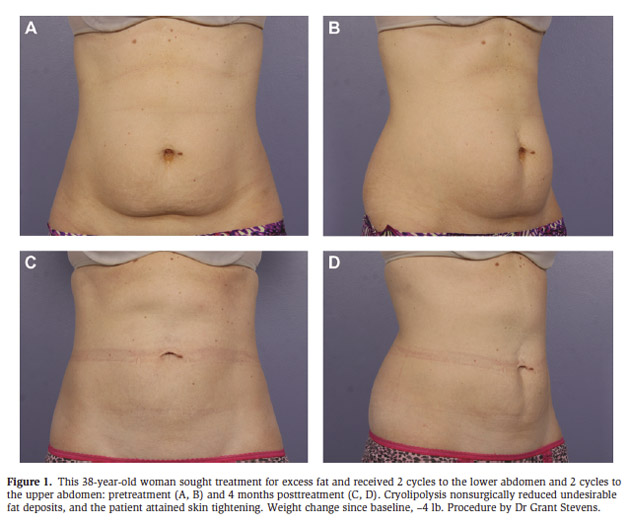 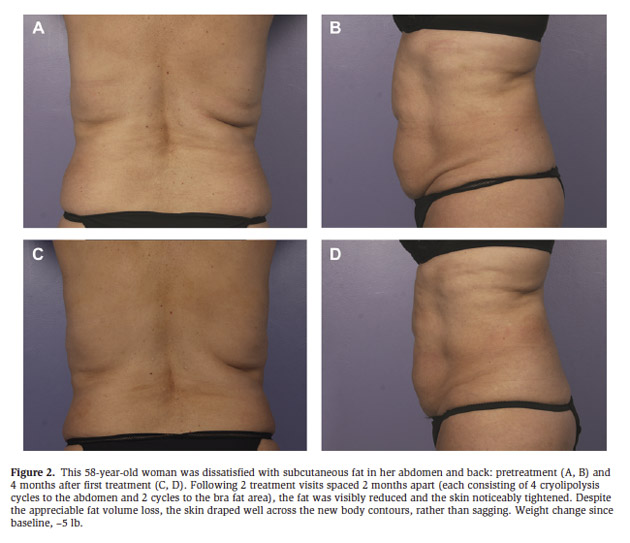 While only 2 sample patients are shown in this article, the improvement in skin appearance following CoolSculpting has been anecdotally reported in many patients, estimated to be 25% at our practice. We have delivered more than 8000 treatment cycles to date, and skin laxity has never been noted to increase following treatment, even after significant fat volume reduction; we estimate that a quarter of our CoolSculpting patients show visible improvement. These are subjective observations from our patients and clinicians, but we wanted to publish these observations to raise awareness of an unexpected effect of CoolSculpting that merits discussion and further exploration. The resultant skin tightening has been observed in patients with skin laxity, regardless of age, and does not appear to be treatment site specific. At this point, it is unknown how predictable the skin tightening results are and how other factors—such as patient age, skin condition, number of CoolSculpting cycles, and duration after treatment—may affect the resultant skin tightening. A follow-up study is planned that will objectively quantify both fat reduction and skin tightening following CoolSculpting in a larger patient population.

While treatments for facial and neck skin laxity are popular aesthetic procedures, the options for treatment of skin laxity on the body are limited. Most patients do not wish to undergo surgery to tighten thin, crepey, sagging skin in areas such as arms, abdomens, flanks, thighs, and buttocks. While dermal fillers can successfully replace lost volume in the face and produce a more youthful appearance, injectable fillers are not feasible for treatment of extensive skin laxity on the body. The most common treatment methods to tighten skin on the body induce tissue heating via radiofrequency, laser, infrared, or ultrasound energy. As shown in this case report, CoolSculpting may be a viable nonsurgical procedure for skin tightening. In addition to fat layer reduction, CoolSculpting can noticeably reduce skin laxity.

The mechanism by which CoolSculpting induces skin tightening is not known. The improved appearance in the skin may not actually be skin tightening but perhaps dermal thickening, resulting in an improved appearance to thin, crepey skin. The change in skin firmness may be the result of stimulated collagen production, new elastin formation, fibrosis, or tissue compaction. Histology analysis from previous studies has shown that the epidermis, dermis, and underlying muscle tissue were not affected in the CoolSculpting treatment sites. In addition, histologic analysis demonstrated that with the selective removal of adipocytes, the thickness of interlobular septa increased at 90 days post treatment. Additional histology analysis from clinical studies is needed to further investigate the changes to the skin and fat layers following CoolSculpting.

This letter to the editor presents the first report on cryodermadstringo — skin tightening from CoolSculpting —and is intended to raise awareness of a phenomenon observed in practice but not yet published in the scientific literature. CoolSculpting is an established, safe, and effective procedure for nonsurgical fat reduction. Moreover, it can achieve clinically significant skin-tightening results. A clinical research study is currently underway to explore CoolSculpting-induced skin-tightening hypotheses, to obtain quantitative objective measurements of skin tightening, and to establish the mechanism of action.