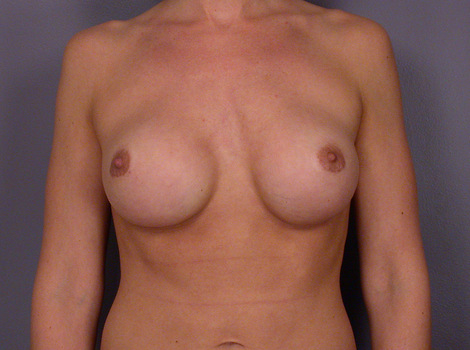 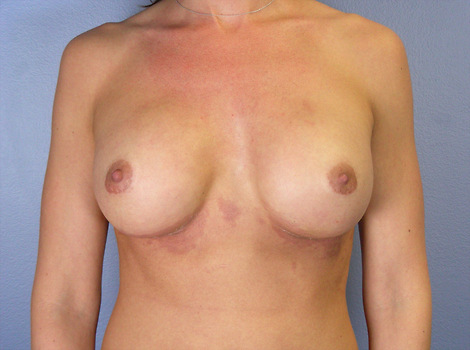 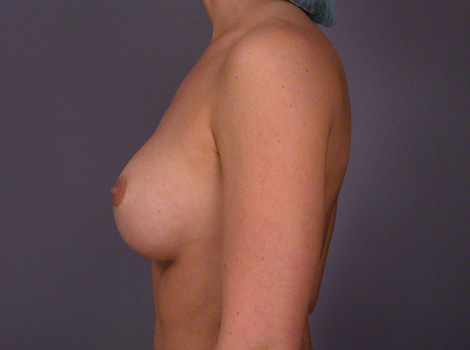 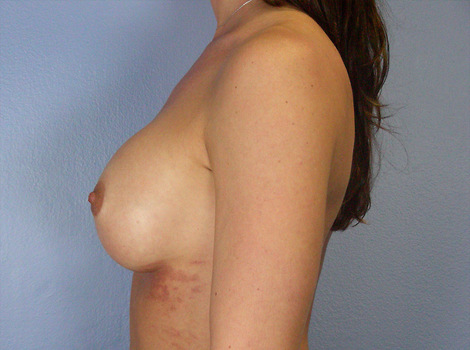 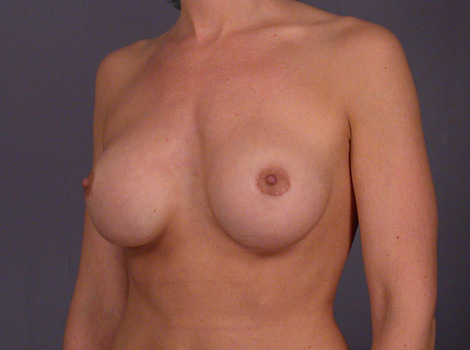 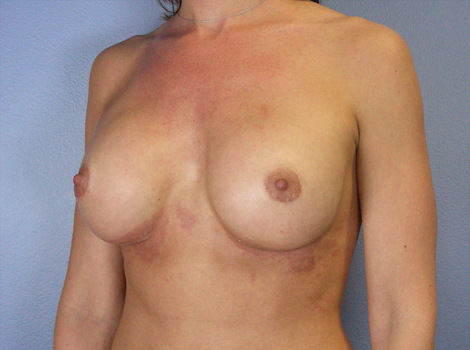 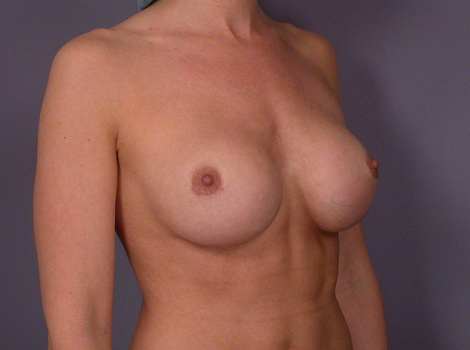 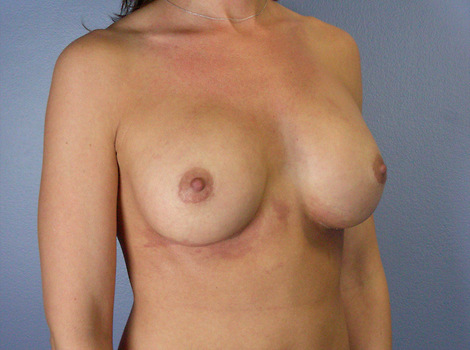 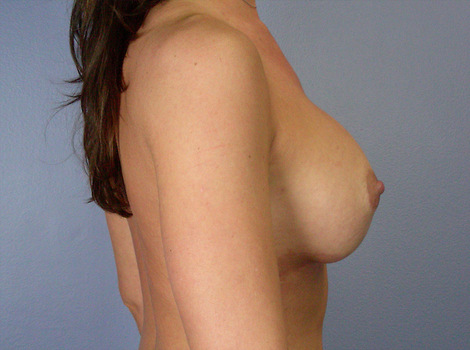 This is a 32-year-old woman in the financial services industry who flew in from New York for corrective surgery on her breast implants. She had previously undergone three breast implant operations by other plastic surgeons in New York City. Before plastic surgery she wore a 34B size bra and she desired to increase her breast volume to approximately a C-cup. Her first breast surgery in New York was a bilateral breast augmentation with 230cc saline implants placed under the muscle through periareolar incisions. She felt that the left inframammary crease (at the bottom of the breast) was substantially lower than the right, and right breast implant was displaced upward and firm with a capsular contracture. Four months later, the same surgeon performed corrective surgery to raise the left crease and to perform a right breast capsulotomy. The patient had some improvement, but felt that the left breast crease was raised too much and the breast implants were not optimal for size, shape and symmetry. Four months later, she underwent a third operation to raise the left breast crease (this time through a new incision beneath the breast) and the implants were changed to 250cc saline on the left and 240cc saline on the right. Although she did have some improvement with each of her operations, she was frustrated that she could not obtain the natural shape and symmetry that she desired. Three years went by before she heard some encouraging news that inspired her to seek out other options for her breasts. She talked to several of her friends in Los Angeles, California who had breast surgery with beautiful results by board certified plastic surgeon at Marina Plastic Surgery Associates, in Marina del Rey, CA. After doing extensive research online, she was impressed with her surgeon’s distinguished credentials, extensive experience and appealing results. She first did a Virtual Consultation with her surgeon, who felt optimistic that he would be able to help her. The patient elected to fly in for surgery to Los Angeles from her home in New York (she was pleasantly surprised to find out that many patients travel to have surgery and that Marina Plastic Surgery had a Fly-In Program to facilitate the process).

When the patient arrived at the office for her first consultation in person, her surgeon confirmed that he thought he could help her. On physical exam he felt that she had a nipple to crease distance on each side that was longer than ideal for her breast volume, her nipples were displaced to the sides, the right implant was displaced too far medially, and she had an early stage capsular contracture on the right. He also emphasized that no surgeon obtains perfect results all of the time, especially when a patient has had multiple operations with suboptimal results by other plastic surgeons.

In the operating room, her surgeon removed her saline implants and performed capsulotomies on each side to adjust the implant pocket size and proportions. He also sutured the right medial capsule to her ribs in order to improve the symmetry of her breasts. He placed a long-acting local anesthesia solution in each of the pockets so that the patient would have minimal discomfort when she awakened from surgery. He then placed Mentor Siltex textured, round, moderate plus profile silicone gel implants, size 325cc on each side. She then wore a special bra and dressing that protected the results of the delicate surgery while she was healing.

The patient was amazed that she was able to obtain such a beautiful and natural result after having difficulty with her previous three breast operations. She said she didn’t even have much discomfort following this operation. The only setback she had was a rash from the surgical tape that started several days after surgery and lasted approximately one week. In these photographs she is shown before and eleven days following corrective breast implant surgery at Marina Plastic Surgery.

For more information on how these kinds of procedures might benefit you, click to set up an appointment or give us a call at (310) 827-2653.