“It’s a bit hard to explain,” said Becca, “but I just wasn’t sure I deserved surgery. I didn’t think it was possible for me. It felt more like a dream than a plan for a long time.”

Becca’s dream of having normal sized breasts took root when she was a youngster in north Florida. “I developed early and quickly,” she said. “In fact, the first bra I recall having was a C cup. I know that’s not really the way it happened, but I sped through size B so quickly I don’t even remember it. I was a C by about age 13.”

No one in her family had large breasts, and she wasn’t really overweight, so Becca saw no apparent reason she developed the way she did. She had few friends with bodies anything like hers and no one to commiserate with. Her mom tried to help her adjust, but for the 5’3″ soccer-playing teen, life just wasn’t comfortable. “I know the grass is always greener elsewhere,” she said, “but I truly would have been much happier being almost flat. I did not want to be known for having large breasts, so I tried to hide them in minimizer bras, hoping no one would know how big I really was.”

Perhaps Becca would have grown more accustomed to her womanly curves as she became an adult, but unfortunately she continued to develop. “In my late teens I was a size DD,” she related. “Then, by the time I was 24 I was a 4D. I think that’s a size G.”

“I had gained some weight, but I was muscular, too,” Becca said. “I don’t like excuses, so I tried to be as active as I could. I went to the gym, I walked, I did aerobics, I dieted. There were times when I didn’t eat right, sure, and there were times when I skipped going to the gym. The guilt piled on when I gained weight, but even when I lost weight, I couldn’t see a difference in my chest. I felt guilty that I couldn’t make a big difference on my own – that, at 24, somehow I had let my body down, and now I was stuck with the pain. I sunk lower as I could only imagine how bad I would look and feel later in life. I saw a chiropractor for neck and shoulder pain, and I took a yoga class.” After finding only a little relief, she started asking questions about surgery.

One physician referred Becca to a plastic surgeon in her area, but he didn’t convince Becca she should go after her dream. “I wasn’t happy when he told me he’d detach my nipples completely to reposition them. I would likely lose all sensation and I would not be able to breastfeed.”

Becca prayed about her problem and continued search for the right path forward. She never expected her prayers to be answered through a Los Angeles plastic surgeon she happened to see on television. But after seeing Dr. Stevens on a news program and visiting the Marina Plastic Surgery Associates Web site, she began to feel she was headed in the right direction. With encouragement from Yvonne, Dr. Stevens’ insurance coordinator, Becca contacted her insurance company. The result? Rejection! The firm denied Becca’s request for coverage, deeming her breast reduction surgery “not medically necessary.”

Becca set out to prove breast reduction was in both her and the company’s best interests. She compiled a package of information for the insurance company, including records of her gym workouts, doctor visits and yoga class. “I wanted them to see that I had made a good effort to take care of myself.” She included letters from others, like her chiropractor, and she topped off the package with a personal letter. “I told them the procedure would be preventative for them in the future. I asked them to give me this chance to be more active, healthy and happy.”

After months of waiting nervously, Becca got good news – her hard work had paid off, her prayers were answered and coverage was approved. She called Dr. Stevens’ office and took the very next surgery opening they had. Breast reduction in Los Angeles was no longer a dream – it was a plan.

The Plan in Action

Becca’s mom flew with her from Alabama to Los Angeles for the breast reduction procedure. “The moment we met Dr. Stevens, we knew everything would be fine,” Becca remembered. “Dr. Stevens reassured my mom that he would take care of me as if I were his own daughter. And he did.”

Dr. Stevens explained his approach to breast reduction in great detail. He said he would separate skin from breast tissue and remove portions of each, but that he would preserve tissue under the nipple without severing the nerves and blood supply. That way, even with her breast size much reduced and her nipple in a new position, sensation would most likely be preserved and Becca would have a good chance of being able to breastfeed. “Dr. Stevens also recommended I have his ‘ Laser Bra‘ – the extra internal support he could give me using a piece of my own tissue inside my breasts. That made sense to me – it sounded like it would help keep my new breasts in position longer.”

Becca’s surgery and recovery went without a hitch. She took pain medication for several days and admitted to being irritable occasionally, but she and her mom were out shopping and sightseeing in Southern California within four or five days. “It felt more like a vacation than a trip to have surgery,” Becca said. More than anything about that time, she remembers her feelings about her new body. “Within several days my neck and shoulders started feeling better. When I looked down and saw how much smaller my breasts were, I said, ‘This is so great.'”

That was three years ago. Today, Becca and her husband, Monty, have an eighteen month old daughter Becca has successfully breastfed. Not only that, having gone through the physical changes of childbearing, her breasts in their internal Laser Bra still look great. “Even after breastfeeding, I can honestly say they’re perky!” Becca has lost weight too, feeling very comfortable with physical activity. “Running around after my daughter is so much easier than it would have been before!” 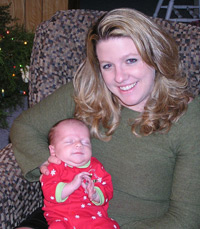 Becca poses with her daughter, Abby, a healthy, breastfed newborn.

“Even after breastfeeding, I can honestly say they’re perky! I still feel elated. I tell anyone who is suffering like I did how happy I am.”

So, what happened to that young woman who didn’t deserve plastic surgery? She has been transformed in more ways than one. Becca’s reasons for being hesitant for so long were complicated. “I believe it’s different here in the South,” she said. “Though plastic surgery is becoming more and more accepted, most people still don’t talk about rushing out to get it. I was just an average person – healthy, with no other real problems. It seemed like an extreme measure to have surgery, and I thought people would judge me, saying that the reason I had large breasts was because I had gained a little weight. Also my husband and I had other places to spend money, and though he was completely supportive and even encouraging, I didn’t want to cause a big expense. I think I just felt that breast reduction was out of my reach.”

“Once I flew to LA, everything changed for me,” Becca said. I was just so impressed by Dr. Stevens and his practice; I would have done almost anything to find a way to have the surgery. Even without insurance; I would have saved for years. It was that important to me.”

To others dreaming about breast reduction, Becca has much to say. “Educate yourself,” she begins. “Don’t let problems get in the way. And don’t settle for a surgeon you’re not comfortable with. Don’t make flying in and out of Los Angeles for breast reduction a big deal. It’s no harder than getting the procedure done locally. Take a family member and make a good trip out of it.”

“Three years later, I still feel elated. I tell anyone who is suffering like I did how happy I am.” No matter what she felt about the surgery and herself before, Becca knows the truth now, and that’s why she wanted others to hear her story. “You know your body best… when you’ve done all you can, don’t feel guilty about taking the next step toward health!”