“After two years I am still excited with the results. I feel very beautiful.”

“Breasts are so significant in our culture,” Christy Carlton said, “in fact in any culture. Breasts are about nurturing; they give love and life. My breasts are central to my feelings about being a woman.”

To Christy, breasts are meaningful in form as well as function. “I’m a visual person,” she said. “I have an appreciation for the human body. Beautiful breasts are important to me.”

For Christy, therefore, it was natural to pursue her idea of “the perfect breast.” “It’s not that I didn’t feel attractive before,” she explained. It’s that after three children, my breasts weren’t as full as they used to be.” After breastfeeding, Christy said, “They just never came back.” For the Los Angeles area resident, breast augmentation was a natural step.

Though Christy says she knew from her early 20’s that she wanted to take steps to fine tune her looks, everything fell into place for her two years ago. Just reaching her mid-40s, she was a few years out of her marriage and she felt free to pursue goals that were important to her as an individual. And her 25-year high school reunion was just around the corner; she wanted to look her best.

“Charlie gets you on your way to creating the perfect breasts. Dr. Stevens is the man with the magic hands.”

Christy called Charlie Sheridan, Director at Marina Plastic Surgery, to talk and get set up with Dr. Stevens. “Charlie is an amazing woman,” Christy said. “She makes you feel completely at ease. She gets you on your way to creating the perfect breasts.”

Christy had done quite a bit of research about breast enhancement in the Los Angeles area before her consultation with Dr. Stevens. “I knew I wanted gummy bear implants,” she said. “I had read all about them and knew they were for me. I also knew what ‘profile’ means and knew which profile would probably be best for me.” Nonetheless, Christy and Dr. Stevens had a lot to talk about during the appointment. “We reviewed photos together so I could show him the look I had in mind. And of course I didn’t know what size implant would give me that look. But Dr. Stevens did. Christy says he gives a lot of his energy and attention to creating the perfect breast for you. “Dr. Stevens is the man with the magic hands.”

A combination breast augmentation/liposuction/tummy tuck procedure, plus ThermaCool Face Lift, was scheduled for Christy several months before her high school reunion. She went to the event in a “fabulous” dress, an outfit she could not have carried off with the same impact before surgery. “An old classmate of mine commented that I’m just like a fine wine,” she laughed. “He said I just keep getting better.”

“It’s great to have the opportunity to reflect on all that’s happened two years after surgery,” she said. “Today it’s hard to remember how I was before the procedure. But I know that after two years I am still excited with the results. I feel very beautiful.”

Christy has her perfect breasts. They are a full size 36C and they’re firm and shapely. Depending on what she’s wearing, she doesn’t always have to wear a bra. “Yes, they’re perky!” Christy said. “Even my nipples look great.”

Discussing what perfect breasts might mean to other women, Christy says everyone should have her own idea about that, with emphasis on “her own.”

“Even though I had started dating again,” she commented, “the surgery was for me and no one else. Make sure you do this for yourself.” 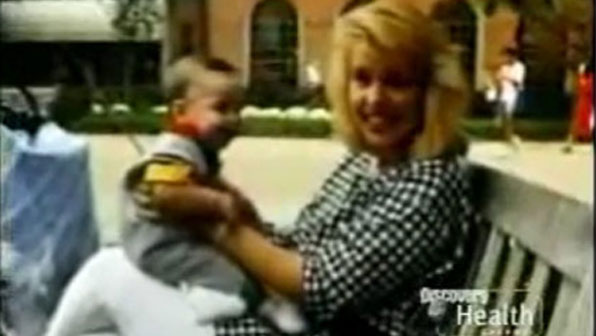