'I feel like I'm deformed down there': Reality TV show sees woman get plastic surgery on her genitalia

It has been called the 'final frontier' of cosmetic surgery.

Now, one woman has openly shared her experiences of labiaplasty - plastic surgery for female genitalia - on U.S. daytime television.

The Doctors, aired yesterday on CBS, featured a 23-year-old who wanted nothing more than to correct her 'painfully long labia.' The segment was part of the worryingly-named 'Gross Anatomy' episode of the series. 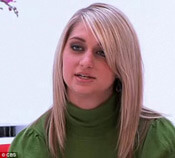 Painful: Shannon, who featured in last night's The Doctors, had labiaplasty to address her 'painfully long labia'

The trainee nurse, known only as Shannon, said that that her 'deformed' genitals are not only a daily discomfort but that they discouraged her from having sex - and were a factor in her relationship breakup.

She said: 'I'm self conscious. I don't really want to have sex - I try to avoid it, so it's kind of a big strain on a relationship.'

She described how she avoids swimming or any activity in her swimsuit and how she first felt different other girls in middle school. 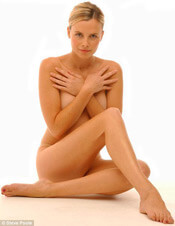 Labiaplasty: While genital augmentation may be in the rise, many women undergoing the drastic options have nothing wrong 'down there'

He said that while 'no one would be cruel enough to suggest a woman should live like [Shanon]' he admitted that many of his clients may not need surgery.

'If I hear the word pain or chafing or tenderness, it's an entirely different consult than if I get the "I'm embarrassed, I think it looks funny." But "I'm embarrassed" doesn't automatically disqualify somebody,' he said, reports the ABC.

'Vaginal rejuvenation' is the umbrella term for a set of procedures that include labia reduction, labia augmentation and vaginal tightening.

Some women - such as those who have suffered vaginal prolapses during childbirth - find rejuvenation surgery absolutely necessary.

For many however, the problem may be more contemporary.

As Dr Travis Stork, the show's host, put it: 'Let's be real... Looks do matter, whether it's your face your hair or even down there.'

Massachusetts General Hospital obstetrician and gynaecologist, Dr Erin Tracy, seconds Dr Stevens' findings - and Dr Stork's beliefs. According to the news site, she said: 'Most of the patients I have coming in asking about this are teenagers that look entirely normal.

'The majority of them, after some probing, seem to have some underlying body dysmorphic disorder or problems in their relationship that make them think they're abnormal.'

Her findings are echoed by Dr Hilda Hutcherson, an obstetrician and gynaecologist at New York's Presbyterian Hospital/Columbia University Medical Center. She sees men as being partly to blame for the rise in labiaplasty.

'For every single thing that's normal about a woman's body there's a man trying to change it... The last frontier was the vagina,' she said, reports ABC.

'They're taking this beautiful, fluffy vulva and making it look like newborn baby's,' she says of the blood-vessel-rich area around the vagina.

She is unswerving in her criticism of society's treatment of the female form: 'They've taken every part of a woman's body and convinced us it's somehow abnormal.'

Shannon is thrilled with the results of her surgery: 'I'm so excited...they look amazing... I couldn't be more happy,' she said on the programme. But not every woman is so lucky.

Risks involved with the surgery include infection, bleeding, pain and discomfort. Misguided women may be causing more problems than they began with in the first place, especially as there is no one standard size or shape of labias and vaginas - or indeed for any part of the body.

'I think women should have options, but I think it's up to doctors to educate them about what's normal,' says Dr Hutcherson.