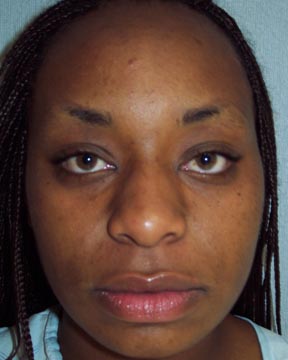 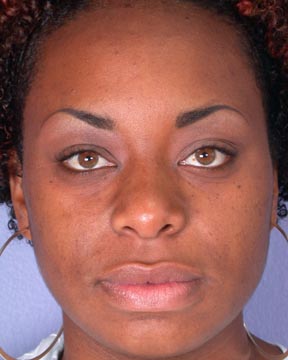 This 21-year-old woman from Los Angeles, California desired nose reshaping (rhinoplasty) to narrow the bones of her upper nose, reduce the bump on the dorsum of her nose and improve her nasal tip definition. She wanted these strong characteristics of her nose to be more subtle, but was concerned that she wanted to maintain a natural looking appearance as well. She had no difficulties with breathing through her nose. She was also happy with the overall arch and width of her nostrils.

After a thorough examination, I carefully discussed these goals and concerns with her. We reviewed important aspects of rhinoplasty specific to African American patients with noses similar to hers. Together we formulated a surgical plan for her nose. We agreed on an open rhinoplasty technique to adjust the nasal bones and tip, but we decided not to make any direct changes to the nostrils.

In our operating room in Marina del Rey,California, I reduced the small bump on her nose and gently moved the nasal bones together. Calipers assisted me in performing precise reductions in the amount of cartilage in the upper tip of her nose. I then used a suturing technique to increase the tip projection and definition through manipulating the nasal tip cartilage. After restructuring the nose, I then closed the access incisions with a meticulous technique.

One week after surgery I removed the splint on her nose. She had an obvious improvement in her appearance from her nose reshaping, and it looked even better as the months passed. We succeeded in narrowing her nose, reducing her dorsal bump and improving the definition of her nasal tip. She was very pleased with these results. In these photographs she is shown before and seven months after her nose reshaping operation at our Los Angeles surgery center.