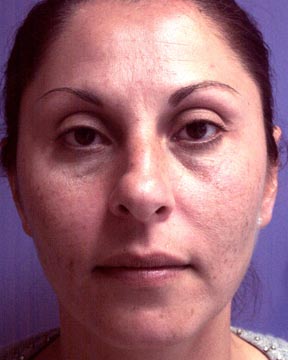 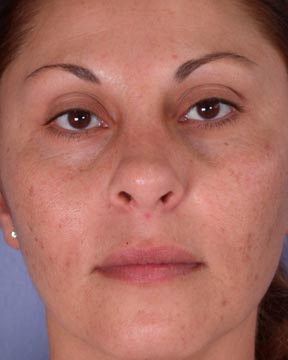 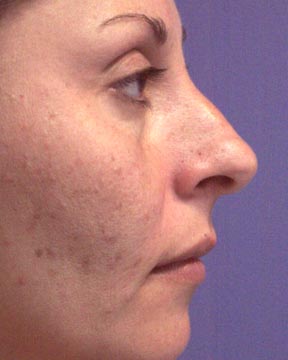 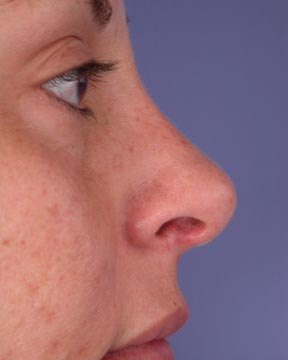 This 35-year-old woman from the Southern California town of Chino Hills desired nose reshaping surgery (rhinoplasty) as well as improved breathing through her nose. She was bothered by the strong appearance of her nose, and she wanted a more feminine look that better matched her overall features.

When I examined her in our Marina del Rey office, I found that she had prominent nasal bones with a bump on her dorsum, as well as a nasal tip that was overly projected. On the frontal view, she had a bulbous nasal tip with an excess of firm cartilage. Functionally, her nasal airways were partially obstructed by enlarged turbinates.

I thoroughly discussed my findings with her and together we formulated a plan for her nose surgery. We reviewed the plan again in detail at her preoperative visit several weeks later.

For her nose surgery I used an open rhinoplasty technique that allowed me to reshape her nasal tip with maximum precision. I removed the excess, firm cartilage from the upper portion of her nasal tip and used fine sutures to increase her tip definition. The tip was moved back to decrease its excessive projection. I also removed the excess bone and cartilage on her dorsum that was responsible for the hump. I then moved her nasal bones together to give her a more consistently feminine appearance. Lastly, in her nasal passages, I moved her turbinates outward so that she would have improved nasal breathing.

She recovered quickly from her surgery and was very pleased with her results. She is shown here before and approximately two months after her rhinoplasty surgery at our Los Angeles office.