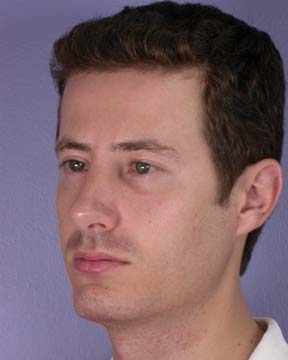 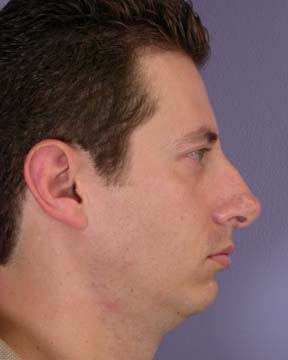 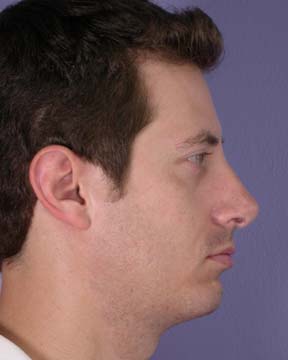 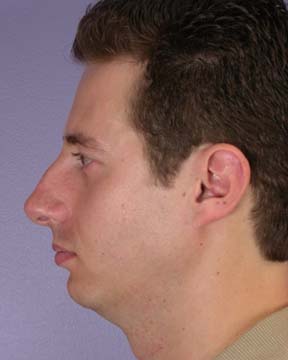 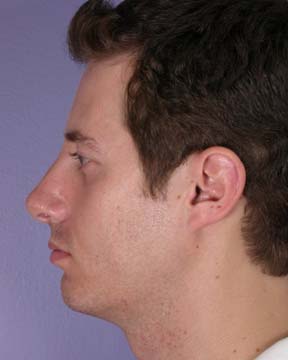 This 28-year-old professional man from Los Angeles desired facial surgery on his nose and chin to improve his overall appearance. He researched plastic surgeons and decided that the wanted a surgeon who specialized in nose surgery and was also certified by the American Board of Plastic Surgery.

In his consultation in our Marina del Rey office, he explained that he hoped to improve the imbalance in his facial proportions caused by his small chin and prominent nose. Although he was slender, he had the appearance of a double chin because of a deficiency of the underlying jaw bone. It was important to him to have a natural looking result from his surgery so that it was not obvious that his look was the result of an operation.

In the operating room, we performed chin augmentation with an implant as well as nose reshaping surgery (rhinoplasty). Through a small incision in a crease underneath his chin, we placed a large, extended anatomical shaped implant. This gave his jaw a strong, broad, and masculine appearance. We then performed a closed rhinoplasty with all internal incisions. We reduced the prominent bump on his nose by removing some bone and cartilage. We also shortened his nose slightly and moved his nasal bones together to make his nose somewhat smaller in all dimensions.

He recovered very quickly from the surgery and had minimal bruising and swelling. He is shown here before and two weeks after his chin augmentation and rhinoplasty.